For my final year project I am studying the Carrick Roads, which is a large estuary in Falmouth, Cornwall. During one of my shoots, I came across a Kingfisher location. I had never properly seen a kingfisher before, except a few occasions when I have seen an electric blue flash fly by, so this was pretty exciting.

Over the next couple of days I visited the location three times, getting to know where the Kingfisher lands and where to position my hide. As it is a tidal estuary, I soon noticed that the Kingfisher only appears at certain times of the day depending on the tide. Personally I found the best time to photograph one is around three hours before high tide.

After waiting for the tides to coincide with sunrise, I set out to photograph the kingfisher. I made sure I arrived at the location at least 30 minutes before sunrise and set up my hide. I did this to prevent disturbing and scaring off the Kingfisher and to allow me adequate time to set up the shot I wanted.

After waiting 45 minutes without seeing anything, I looked out the back of my hide and saw these fantastic sunrise views.

I suddenly had a difficult decision to make; either go out and photograph different species in the sunrise or wait for the Kingfisher, which I had set out to do?
In the end I decided to stay in the hide and, fortunately, within 10 minutes the Kingfisher had appeared,  landing on the perch I had intended to photograph it on.


The sun was only hitting this perch and the background was in darkness creating this effect. It was all natural lighting without flash. This is the shot I was looking for - and the decision to stay in the hide had paid dividends on this occasion.

After just 15 minutes the golden light had gone, the sun disappearing behind the clouds. The Kingfisher was still around, but now on a different perch. 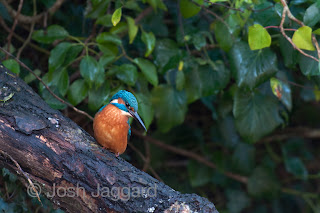 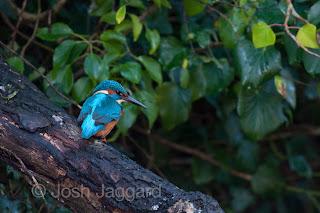 These photos aren't, in my view, as effective as the previous one, but do show more of its habitat. My next plan is to attempt a wide angle shot of the Kingfisher in its natural environment which I am hoping to attempt within the next four weeks when I return to Cornwall.

My main tips for photographing Kingfishers would be ;
Camera used: Nikon D90
Lens used: 300mm F2.8 with a X2 Converter

I hope you enjoyed this, my first blog. Many more to follow!!
Posted by Josh Jaggard at 14:40

Josh Jaggard
I am a passionate wildlife photographer. I am currently a student on the 'BA Marine and Natural History Photography ' at University College Falmouth in Cornwall. I am 20 years old and have had an interest in photography and the natural world for years.